At the Diamond Dance you can enjoy hours of live music performed by some of the best local and nationally known musicians, dance demonstrations, DJ’d music between sets, art exhibits, discounts on dance lessons in the elegance of the historic Saratoga Music Hall.

If you arrive a bit early, you take advantage of the free beginner dance lesson at 7:30pm!

The Sinatra songbook from its beginning in the swing era of the 1930’s to the definitive recordings of the “sing” era of the 40’s and 50’s are representative of Frank Sinatra’s impact on American Culture, and despite changing record formats, Sinatra continually made his mark singing and promoting the American popular song throughout a career that spanned 60 years.

With dinner and a show, The Joey Thomas Big Band will have you humming Sinatra standards including “The Christmas Waltz,” “Have Yourself A Merry Little Christmas,” and “White Christmas” long after the evening is over! 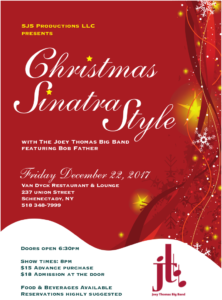 The Joey Thomas Big Band is returning to The State Room!

Over the last century, Frank Sinatra has been the icon of the Great American Songbook with songs of love and master of flirtation, and who else should showcase the sultry side of Sinatra on Valentine’s Day than The Joey Thomas Big Band. On this Valentine’s Day weekend you’ll have two chances to treat your special Valentine to a sumptuous four-course dinner, show, and dancing.

Here’s a sneak peak at the menu:

And you know The Joey Thomas Big Band is the best dance band in the area, so come enjoy your Valentine’s Day Dinner with your honey and slide your jib and shim, sham, shimmy!

Treat your sweetie pie to a delightful dinner and show that you won’t find any where else! Reservations are required, so call The State Room at (518) 432-7773. 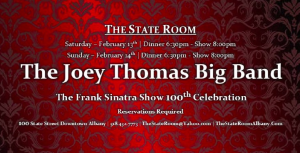 We recently had the pleasure of performing for the wedding reception of Anthony and Rebecca at The Sagamore Resort in Bolton Landing, NY. Quite a fun celebration! Courtesy of vocalist April Marie, we are able to share some video. So, here’s The Birth of the Blues featuring vocalist Bob Father with The Joey Thomas Big Band.

What a song! The Birth of the Blues music was written by Ray Henderson with the lyrics by Buddy G. DeSylva and Lew Brown. Published in 1926, it was recorded in 1927 by “Whispering” Jack Smith, the Hamilton Sisters and Fordyce (Three X Sisters), and by Cab Calloway, in 1943 or 1944.

And, of course, the great song man himself, Mr. Frank Sinatra, had it as a hit later on. It was frequently performed by popular singers such as Bing Crosby, Sammy Davis, Jr., Shirley Bassey, Keely Smith, Jack Teagarden, Pearl Bailey, and Al Hirt.

The Joey Thomas Big Band is seeking a Male Vocalist for selected performances.

Here’s an opportunity for a versatile male vocalist to stretch his abilities and refine a diverse range of repertoire in front of the premier modern big band of New York’s Capital Region (Albany-Troy- Schenectady-Saratoga-Amsterdam-Hudson) . If you …

Always a wonderful evening, The Joey Thomas Big Band is pleased to be returning to the Dennis Madden 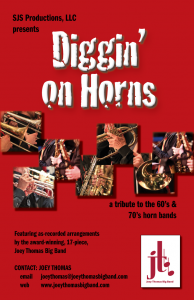 Stage at Freedom Park in Scotia! The concert starts at 7:00 PM.

This year’s special show Diggin’ on Horns is one to get you off the lawn or out of your chair and dancing till the end of the night. Come prepared with your dancing shoes!

Don’t forget, you can get refreshments at Jumpin’ Jacks!

Click here for directions to Freedom Park in Scotia.

This evening’s performance is sponsored by Berkshire Bank.